Rufus doesn’t like being left at home when the kids come with me to the veg patch so today he was allowed to come with us, as long as he promised not to dig any holes in the wrong place….like all over the place ! …like last time. He promised. 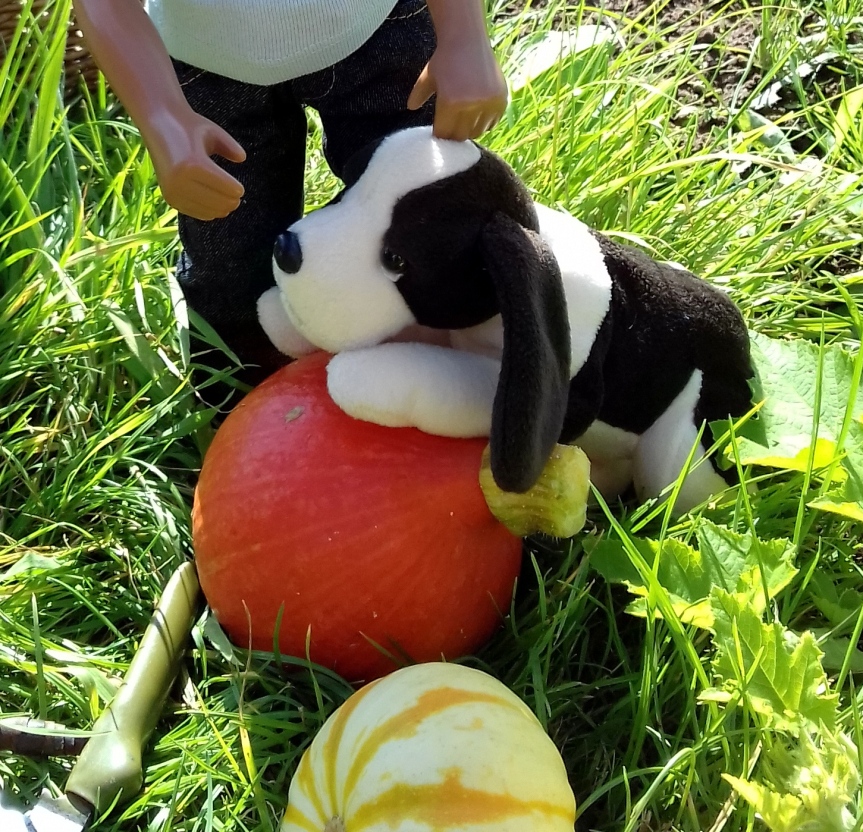 He really enjoyed picking the squash that were ready and got very attached to the big orange one that looked just like his ball at home.

Do you think Mum would mind if we played football with it ?   He won’t let go !

I know she’d mind. I don’t think pumpkins like being kicked around like a football. Let’s find him something else to play with..

You can help us put these in the basket Rufus, look, they all have a handle  🙂 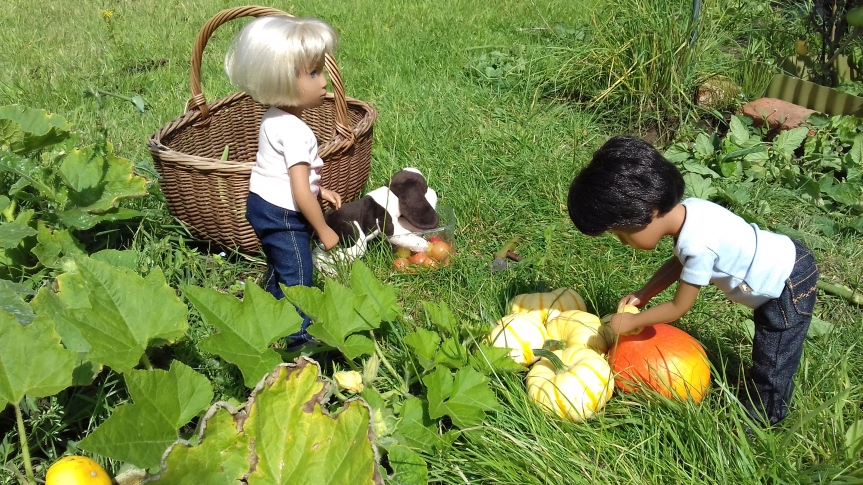 He’s more interested in these little tomato ‘balls’ now …let’s keep him away from the big ones..

Rufus was beginning to think this was no fun at all. There were no real balls. Until he thought of playing Hide and Seek. He forgot to tell Hannah and Joe that they were all playing though. Hannah went off to see if the beans were big enough to pick.

She thought they were so she went to look for Rufus to give him his very own job to do. But where was he now? Not digging a big hole I hope..

She asked the dragonfly if he’d seen Rufus. He’d been watching them carefully. He said he did know where Rufus was and that Hannah just had to go back to the last place she’d seen him. 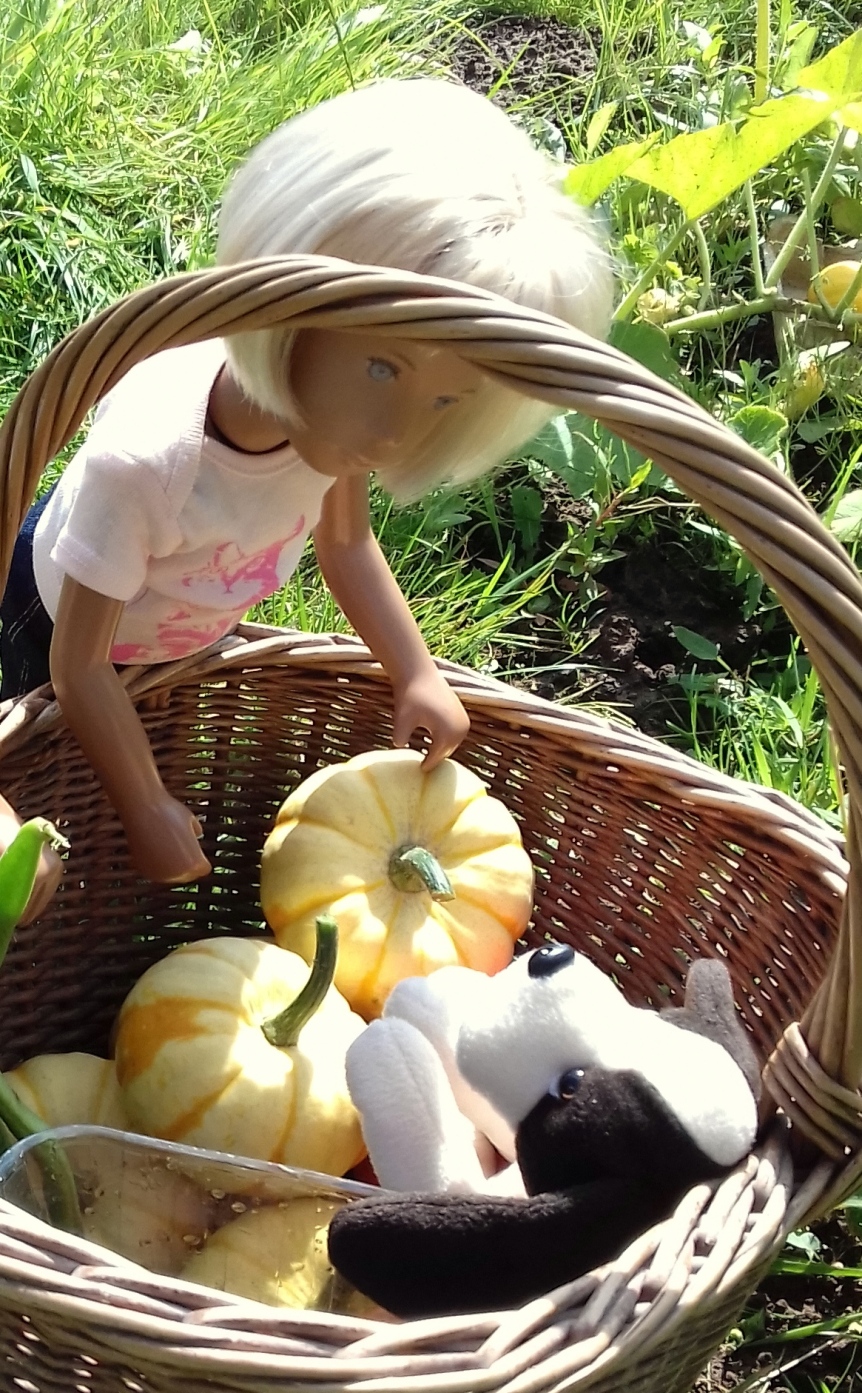 And there he was. He’d been hiding in the basket and then found he couldn’t get himself out. How long have you been in there? asked Hannah. 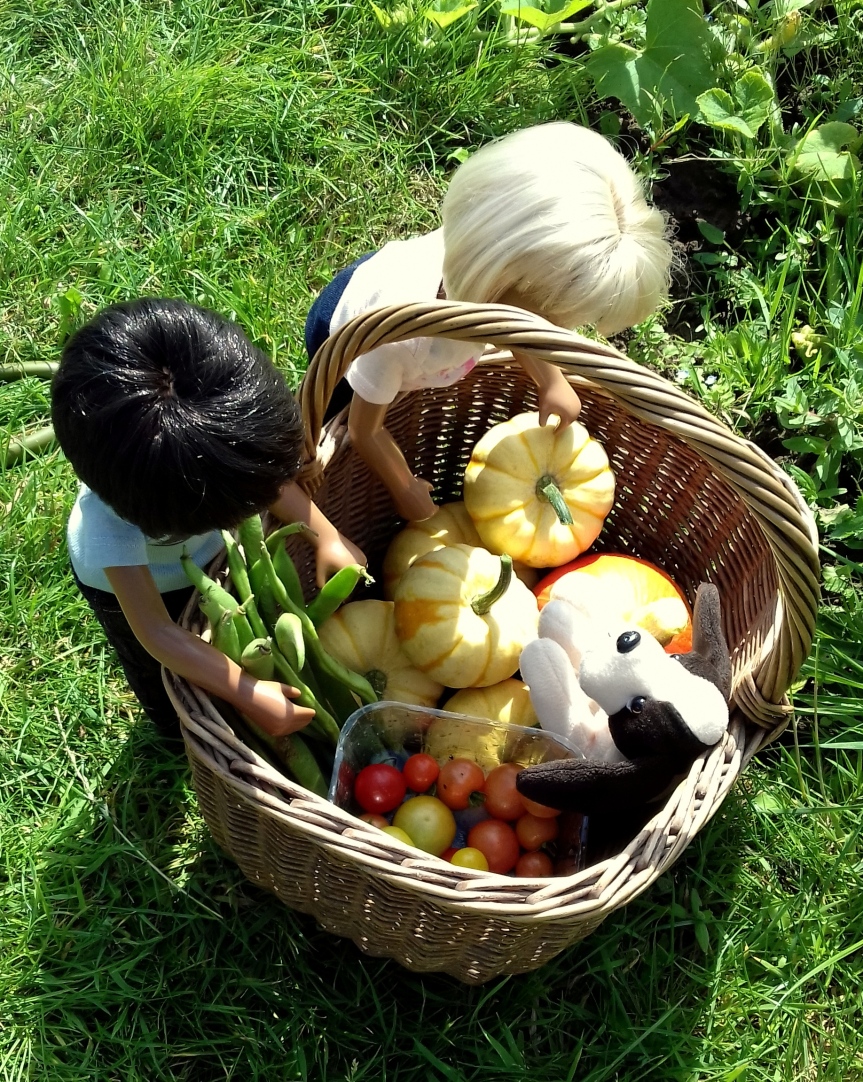 Ever since we started playing Hide and Seek but I’d like to get out now. 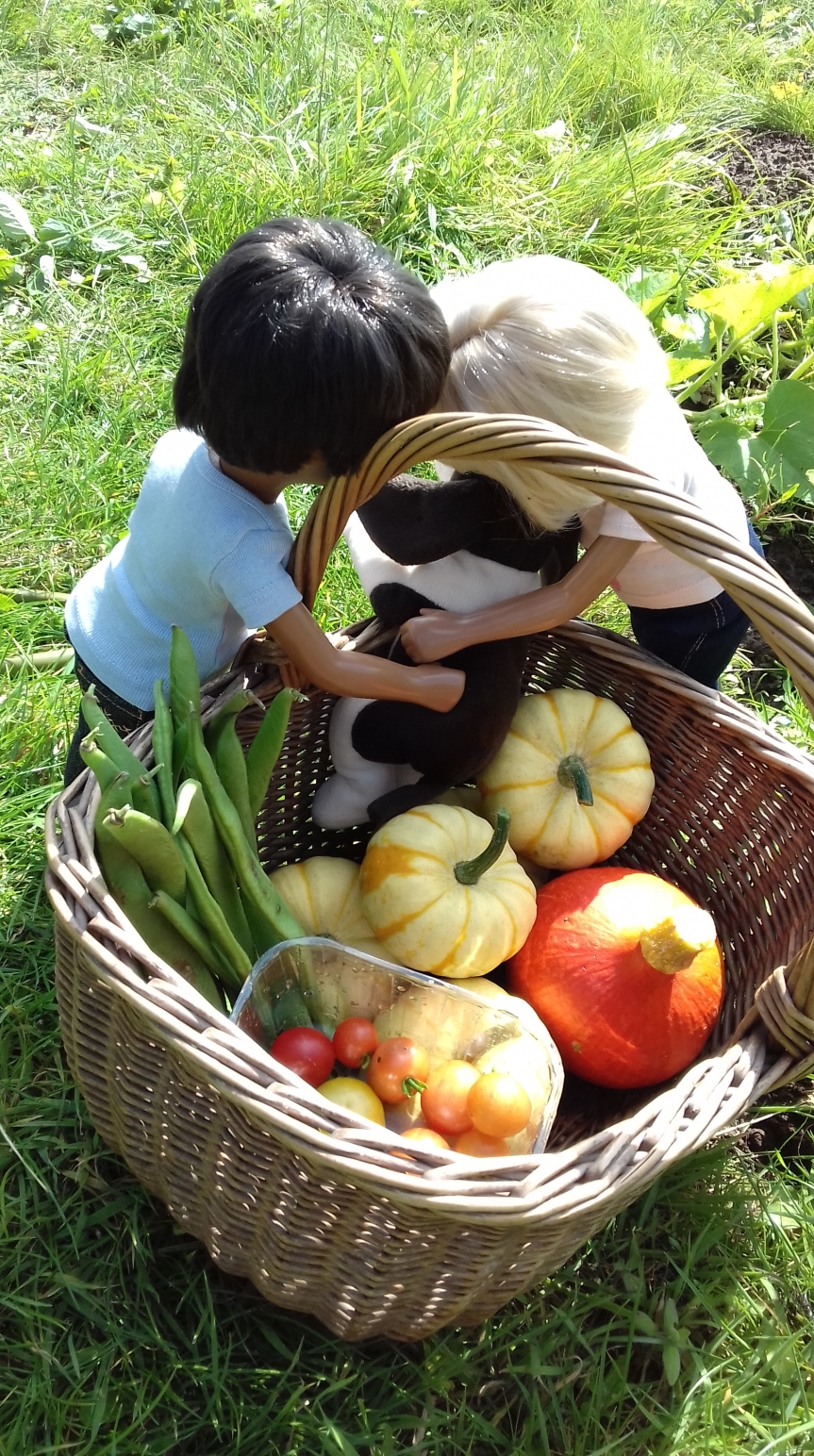 Oh, we’re sorry….we didn’t even know we were playing. We didn’t mean to go off and leave you.

We have the perfect job for you to do. Do you remember Joe’s wheelbarrow ? Of course Rufus remembered it…and he suddenly remembered he wanted a turn being pushed around the plot in it ! 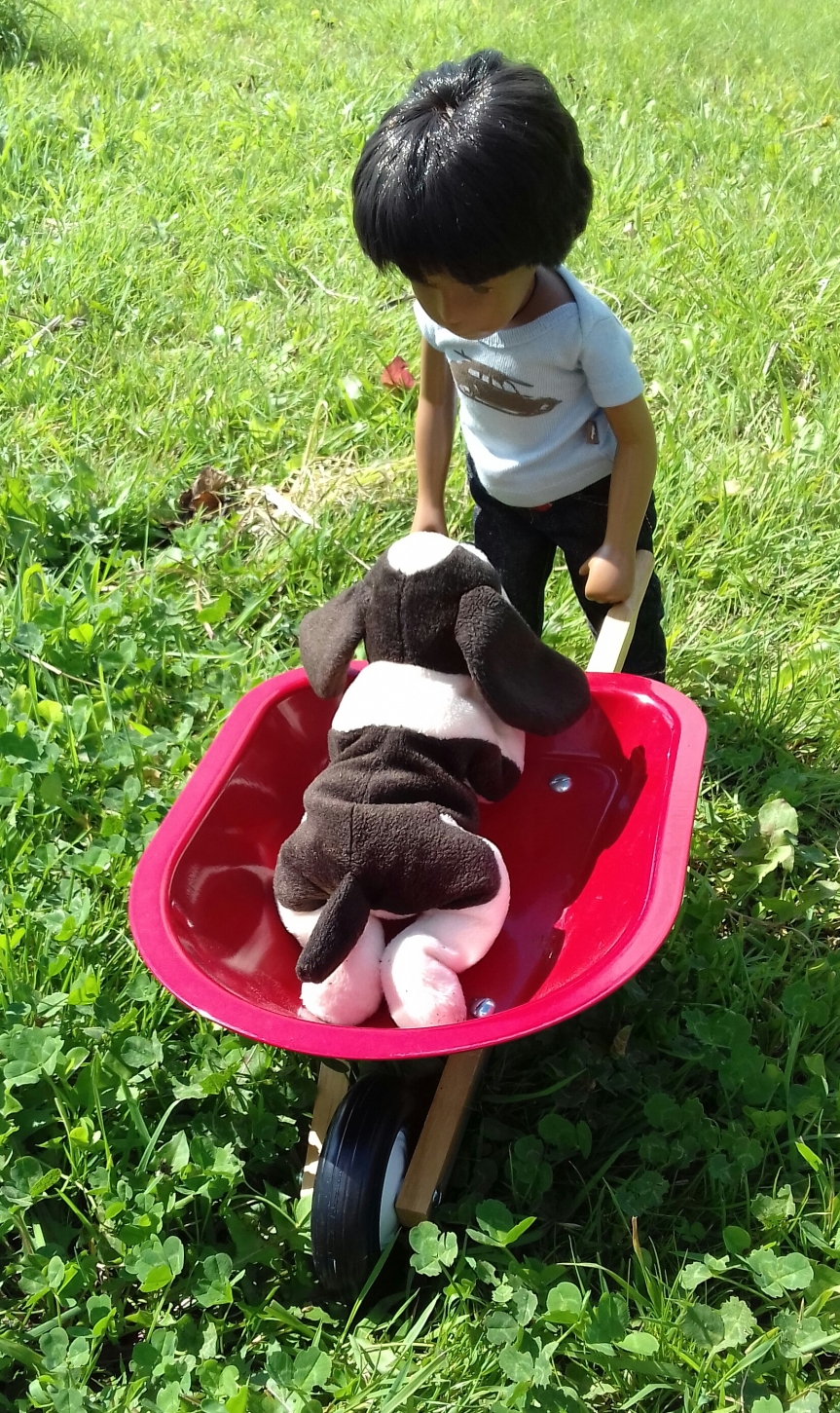 Ok, once more round the plot then we have to do some jobs !  Hannah has a good one for you. Ok Rufus, I need you to stack these pots up tidily…

What ? That’s not a job for a Rufus !! What kind of a Rufus stacks plant pots tidily ??

Meanwhile Hannah and Joe went to check the big pumpkin..

Well Mum, it’s a bit of a jungle in here. We (you) really need to clear some of this so we can find the pumpkins, btw. I knew I shouldn’t have let her have a mobile phone. But look, it’s starting to turn orange !!! It will definitely be ready for Halloween  🙂 !! 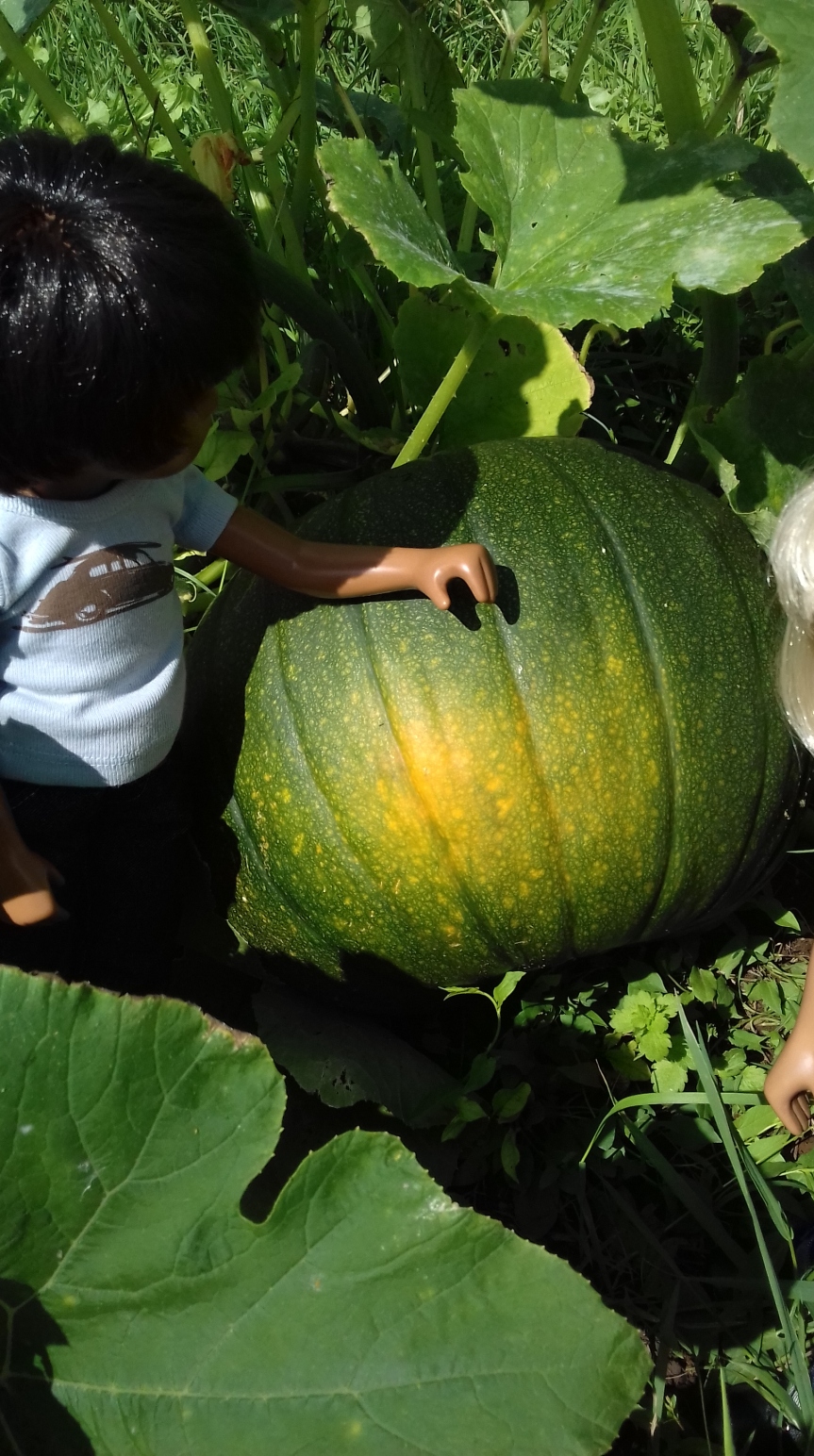 And just look at the leeks we planted a couple of weeks ago !

They’re much bigger because of all the rain we had this week. 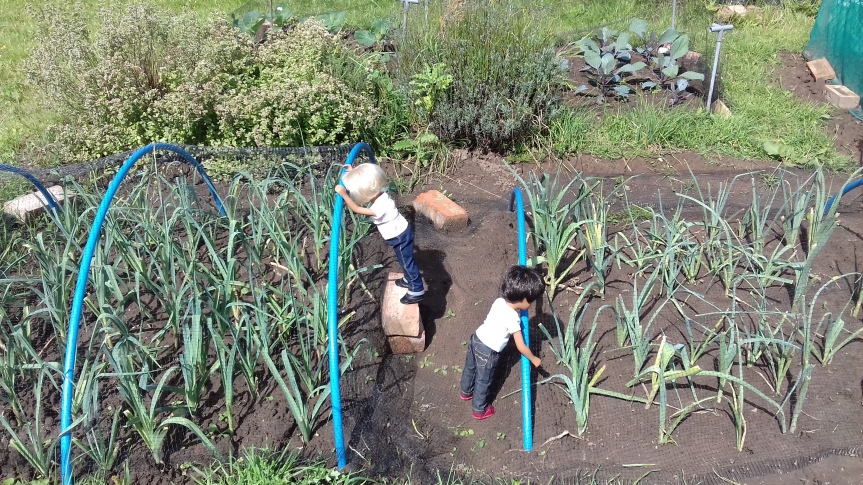 And even the cabbages we planted last week are twice as big. Mum wants us to stay here and scare away the Cabbage White butterflies.

She says they can get through the nets and lay their eggs and then the caterpillars hatch and eat all the cabbages so we have to make lots of noise and run up and down ! That’s something we’re good at. That’s also something that Rufus is good at. Where’s Rufus ?

They went to ask the duck family at the end of the plot if they’d seen Rufus….they hadn’t.

They found Rufus near the pots he was meant to be tidying. Instead of that job, he’d found a much better one. He was a wheelbarrow dog now. Even a wheelbarrow full of beans. Actually it was a bit of a struggle to push, but that pile of untidy pots was in the way. 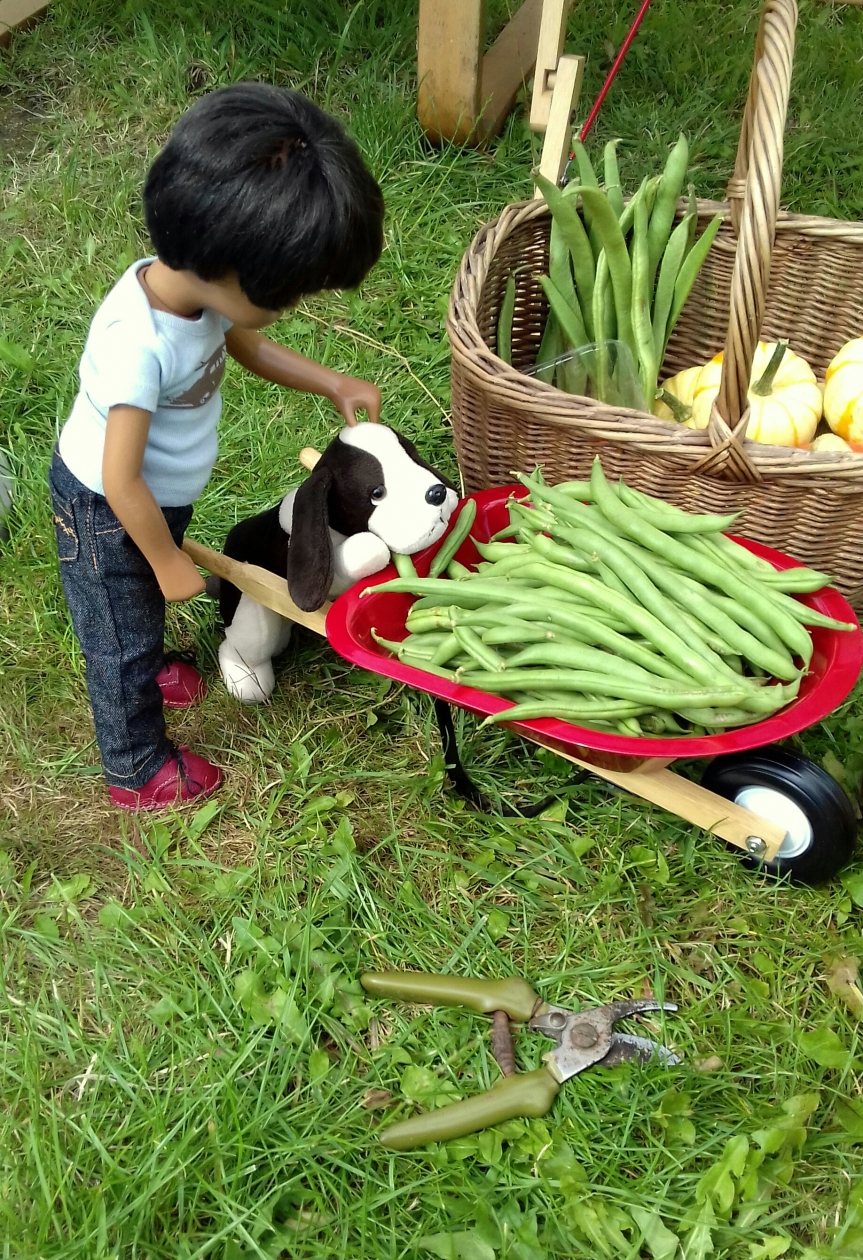 Do you need any help Rufus ?

You are a good boy ! Mum will say you’ve worked very hard. It’s time to go home now. Can you push that all the way to the car ?  🙂